How We Got Greenlit in 2 Weeks

A lot of people have questions about how it all works, so I'll write how things went for us.  I also had no idea what I was doing when I started coming up with videos/screenshots, but there are a lot of other posts about this subject that helped me get on the right path.  Hope this one helps others too.

How Does Greenlight Work?

Before getting into how we got it done, it's important to understand how the system works. There are tons of submissions that go on greenlight everyday, so obviously there needs to be a system to control the flood of bad games that could pass.  Users vote yes/no/ask later on games they see and choose to write a comment to help the developer.  Here is the process -

We got to 100% within the first day (plus a couple hours maybe).  After you hit the top 100, you start getting ranked to other games that are in the queue to be greenlit.  Ours got up to #12, but again, that number holds no real value since it's comparing yourself to games that are currently in the same process.

Things we did to help us
It's important to note that our case is a bit different than others, here's a few reasons why -

Goes without saying that the way you present your game is vital.  If you don't have the best video, cool screenshots and a catchy title, you might struggle trying to get attention.

Title & Thumbnail
If you haven't homed in on a title yet, be sure to spend some time to come up with something good.  The thumbnail for greenlight is square and decently large, can also be an animated gif.  These 2 things are the first thing people will see if they're browsing a list so it has to catch their attention.

Spend the most time on your video
This is the first thing a viewer will see when they go to your page, make sure this is is the best part, even if it means you spend less time on other aspects of your marketing.


For us, the video was kind of a difficult process.  Initially we had one video, and people started complaining about some meme we had that I wasn't aware of.  We then switched it out to have some Let's players, but we got backlash for that too because some people didn't like those guys.  Eventually I uploaded a final one with more gameplay and cutting out some unnecessary stuff and just left it.  There wasn't much I could do at the time to fix it and we were already at 100%.  I can always change the video once the game is released.


Good Description, Graphics & Screenshots
I kept things simple for my description and I made sure to break up paragraphs with some images (you can actually embed those with a code in steam).  Screenshots I mocked up since our game wasn't in a finished state for fullscreen yet.  I probably spent the least time on this part because not as many people will look further into it, but be sure to add enough so your game looks more legitimate. 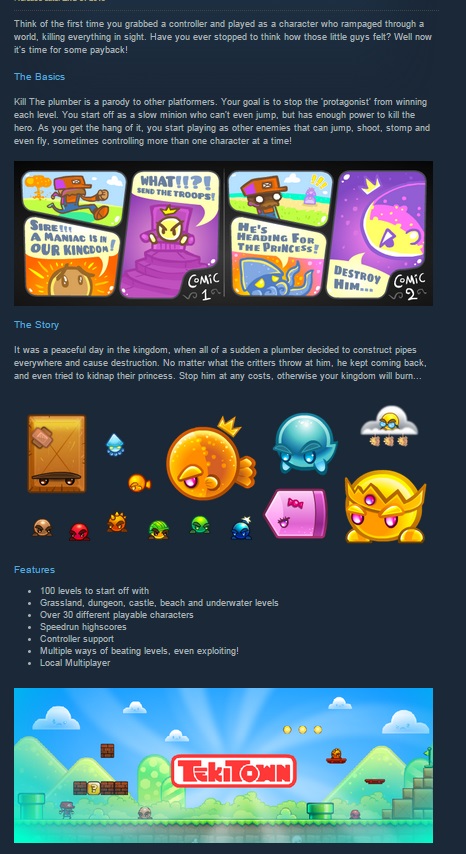 Do you want to buy this game?
One of the most frustrating things about greenlight is this question.  It's asking the viewer if they would like to play the game instead of asking if it looks like a decent game you might recommend.  Because of this question, a lot of submissions get lots of 'No' votes.

Participate in the Discussion
Players see it as a good sign when the developers go into the comments section and respond to some of the concerns or questions that people have.  You can also figure out why your game might not be doing so well if you see a lot of people complaining about something.

Don't be Discouraged
There will be a lot of garbage thrown at you for the most minuscule problems.  There's no way you can please everyone, so just keep your head straight and work hard to keep going.


Don't Get Too Stressed
You already submitted the game to greenlight, so there's not much else you can do but wait.  It might take a few months before you're greenlit, but in that time be sure to keep working and stay positive.  If you made a good game, you shouldn't have a problem.

Your Job's not Done Yet
Unless you've completed the whole game before deciding to greenlight it, you've still got a ton of work ahead of you.  Lots of games are currently greenlit and unreleased, you can bet that a lot of them won't see the light of day.  Don't let your game be one of those.

Please write any corrections in the comments about some of the stuff I wrote if it's not right or you have different opinions.  Other than that, feel free to ask anything else or say whatever is in your mind.