Going to make a quick tutorial on how to make a character for your 2D game. Won't include animating yet, but I'll run through the things you need to make in order to be ready for animating. This is going to be a very basic character, so it might not be perfect for your game.

I'm using Flash for this because it's well designed for my needs and I can make assets way faster than any other program.  Plus it's vector, which is good if you need to export for a game that requires certain resolutions. Also using a Wacom Intuos 5, if you don't have one, I highly suggest it but these assets you can simply make with pencil/paper and a mouse.

Start off with a sketch of your character, either directly in your program or by hand and scan it in. Make it simple. I sketch one basic sketch in light color and then make a more detailed sketch above that layer in a darker color.

Next we need to break him apart into different part so we can animate him easier. Depending on what you need, you might want your character in several body parts, but I will make this one very simple. For instance, I could make the arm into (hand) (lower arm) (upper arm) but instead I'll make it into one part. 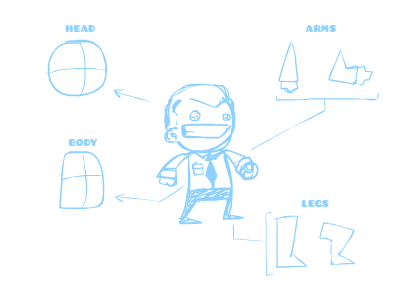 Here we have a (head) (body) (arm1) (arm2) (leg1) (leg2). There are 2 different arms and legs so we can use the bent ones for run cycles or if the character isn't standing straight up. Later on it'll make more sense. In total we need 6 assets for this simple design, so let's make them.

Color isn't important when you start this part, use grey and choose colors later. 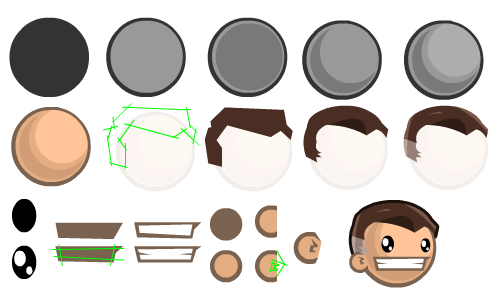 Same concepts here as before.  You might have noticed I left out the pocket.  Any ideas why?  Unless you're walking one direction throughout the game, you want to make the assets mostly symmetrical.  No one's going to tell anyway, but you will.  Every time you test your game, you'll cringe over that pocket changing sides.


And finally, composing your images.  You might need to tweak some things to make it look better.  For my example, I made each asset separate from the sketch (to show the steps I take when making assets), but I suggest you draw directly on top of the sketch to make sure your assets fit better.